Over 20 Years of Unparalleled Success

After several years of testing and development in the early 90s, the first ScaleBlaster units were released in 1995. From the initial installations ScaleBlaster was an immediate success. Despite entering an industry with a dubious, "snake-oil" reputation, ScaleBlaster was able to overcome those obstacles by building a worldwide network of dealers, wholesale suppliers, and major retail stores that believed in our product.

ScaleBlaster became the first and only electronic descaler to be successful in the residential, commercial and industrial markets. Today, there are hundreds of applications that ScaleBlaster can be applied to. Many of the world's largest companies use ScaleBlaster to solve their hard water problems without the need of salt, chemicals or maintenance. With over 89% of the USA and the world experiencing hard water, ScaleBlaster is the healthy & environmental way to solve hard water problems in the residential, commercial and industrial fields. 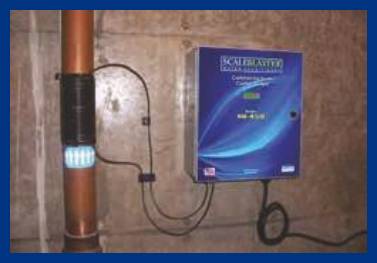 ScaleBlaster is an innovative & compact state-of-the-art computerized water conditioner that is installed on the incoming waterline entering the home, building or your equipment. A signal cable is wrapped around the outside of the pipe and is non-intrusive. No cutting into the pipe or special tools are necessary. From residential homes to commercial & industrial applications, ScaleBlaster is the world leader and innovator in solving hard water issues without using salt or chemicals.